CAS DataLoggers recently provided the data acquisition solution for a state-owned oil and gas company located in Eastern Europe involved in developing natural gas in distant gas fields. The gas came out of a wellhead for processing in either of two dehydration plants. These plants extract water from the gas before sending it through a compressor station and then pumping it through the pipeline system. However, since the two dehydration plants were based in a remote location, the company needed a standalone data acquisition and logging system to record production and process data from the plant and also to gain remote access to all recorded data. This system would have to be able to perform high-precision measurements and also feature sophisticated alarm and programming capabilities enabling the device to process measurements and initiate actions on its own.

Plant management decided to install a Delphin TopMessage Data Acquisition System in each of the two dehydration plants. Additionally, one ADVT module with 15 analog inputs and one IOIT module with 24digital inputs for status monitoring were also installed in each plant. The TopMessages were then interfaced via Ethernet LAN to a MoRoS UMTS router to provide remote access functions. In case of an accident in hazardous areas, each complete system was then fitted inside an explosion-proof box outfitted with EX barriers. Within its protective enclosure, each Delphin TopMessage was then interfaced to 3 tank level transmitters using a 4-20mA analog output signal, and also to 3 gas volume conversion devices from VEGA through an RS-422 Modbus RTU interface (see Figure 1). 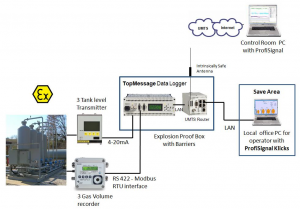 The TopMessage data acquisition device was capable of both Ethernet networking as well as direct PC connection (P2P). Its analog inputs could be attached to RTD sensors, thermocouples, volt or 20 mA signals, enabling any physical value to be acquired as needed. The measurement data was saved as scaled and linearized to the device, and scaling was pre-configured for all current thermocouple and RTD sensor types. The maximum 24-bit resolution measurement accuracy enabled high-precision measurements without the need for any signal amplification. Each TopMessage device could be  equipped with up to 30 analog inputs or 48 digital inputs, with any possible combination of I/O modules.

Ideal for many different data logging, data acquisition and testing applications, Delphin TopMessage systems perform tasks in the fields of process technology, test engineering, and research and development, offering quick and reliable signal processing from a few thermocouples up to thousands of measurement points spread out over the plant. 1 GB of local memory stored all readings. Housed in its sturdy explosion-proof enclosure, the TopMessage system featured  slots for analog or digital input or output cards, as well as n Ethernet interface and CANbus for expansion modules. Screw terminal connections provide secure connections and reliable operation. Additionally, the TopMessage's small size of 200 x 118 x 90mm made for a quick installation.

The dehydration plant operator based in the save area had a local monitoring PC running Delphin's free ProfiSignal Klicks software. ProfiSignal Klicks offered a user-friendly development system for programming the data recording and reporting functions with no specialized IT knowledge required. The software also contained functions for automating processes and generating user-defined reports. Operators used the software's mimic panel to monitor plant performance and also set up input screens for test parameters, test sequences and reports through the Klicks automation programming language. This provided engineers with a flexible software tool for generating their own complete applications. Utilizing the UMTS router, the control room operator at the head office had remote access at all times to the data from the TopMessage device and could see live data and downloaded data from the system memory. Additionally, the data download could be automated by using the scheduler function of the DataService Configurator. The dehydration plant itself was covered by an EDGE G2 mobile communication network.

The oil and gas company gained several benefits from installing the Delphin TopMessage dataacquisition system in each of its two dehydration plants. The TopMessage data acquisition device, equipped with the UMTS router, served as an effective solution for this application covering all requirements. Additionally, the TopMessage's compact size made the system easy to install in the explosion-proof box to guarantee its safety. Additionally, remote access was easily configured with the UMTS router, which also provided networking functions or local PCs and printers. The TopMessage system itself supported many serial interface standards so that VEGA Scan EK220 volume conversion units could be interfaced. The popular ProfiSignal Klicks software was included free to develop an operator user interface, including mimics, and also added reporting functions.

As an option for larger projects, up to 10 Delphin TopMessage Slave Modules could be used as expansion chassis to increase the master unit's capability up to 1000 hardware/software channels, with all data transfer between master and slave taking place via a CANbus. The slave modules are connected via CANbus to the master with a maximum bus length of 100 meters.

For further information on the Delphin TopMessage Data Acquisition System, other devices in the Delphin product line, details on any other data acquisition and control system, or to find the ideal solution for your application-specific needs, contact TALON Technical Sales at 281-999-8588.